Rocky Mountain spotted fever (RMSF) is the most common tick-borne disease in Arkansas. RMSF is caused by the bacterium Rickettsia rickettsii. This bacterium is carried mostly by the American dog tick, Dermacentor variabilis, but also by the brown dog tick, Rhipicephalus sanguineus. Not all ticks are infected. It takes an infected tick four to six hours to spread disease after attaching to the host. Adult ticks look for large hosts such as dogs, but they also feed on humans. Ticks are often found in overgrown lots and along weedy roadsides, paths and hiking trails. Most RMSF cases occur between June and August when tick populations and outdoor activities are highest. Half of all people with RMSF do not remember being bitten by a tick.

It is important to get medical care as soon as possible if you think you have RMSF. Blood tests are required to diagnose RMSF, but treatment should begin as soon as symptoms and/or recent tick exposure suggest RMSF.

Ehrlichiosis is the name used to describe several bacterial diseases that affect animals and humans. Human ehrlichiosis (formerly called human monocytic ehrlichiosis or HME) is caused by Ehrlichia chaffeensis (first recognized in 1986 from a patient infected at Fort Chaffee, AR) and Ehrlichia ewingii. Ehrlichiosis and Anaplasmosis have similar clinical presentations, but they are transmitted by two different species of ticks and generally occur in different regions of the U.S. Ehrlichiosis is most frequently reported from the southeastern and south-central regions of the U.S., and from the eastern seaboard extending westward to Texas. The areas from which cases are reported correspond with the known geographic distribution of the Lone Star tick (Amblyomma americanum), whichis associated with the transmission of both E. chaffeensis and E. ewingii. Three states - Oklahoma, Missouri, and Arkansas - account for 35% of all reported E. chaffeensis infections.

Symptoms may appear up to 10 days after a tick bite.

Anaplasmosis, ehrlichiosis, and Rock Mountain spotted fever are treated in the same manner with doxycycline. Clinical suspicion of any of these diseases is sufficient to begin treatment. Delay in treatment may result in severe illness and death.

Tularemia is a disease of animals and humans caused by the bacterium Francisella tularensis. Rabbits, hares and rodents are especially susceptible and often die in large numbers during outbreaks. Humans can become infected through several routes, including:

Symptoms vary depending upon the route of infection. Although tularemia can be life-threatening, most infections can be treated successfully with antibiotics. Reduce the risk of getting tularemia by following these steps:

Anaplasmosis is a tick-borne disease caused by the bacterium Anaplasma phagocytophilum. It was previously known as human granulocytic ehrlichiosis (HGE). Anaplasmosis is spread to humans by tick bites primarily from the blacklegged tick, Ixodes scapularis. Anaplasmosis is most frequently reported from the upper midwest and northeastern U.S., in areas that correspond with the known geographic distribution of Lyme Disease. In Arkansas, these ticks are commonly found in shady areas along roads, meadows and woods. The risk of picking up these ticks is greater in wooded or brushy areas and in the edge area between lawns and woods.

Symptoms may appear up to 10 days after a tick bite.

Anaplasmosis, ehrlichiosis, and Rock Mountain spotted fever are treated in the same manner with doxycycline. Clinical suspicion of any of these diseases is sufficient to begin treatment. Delay in treatment may result in severe illness and death.

According to the CDC case definition for Lyme disease, Arkansas is considered a low-incidence state, meaning there are less than 10 confirmed cases per 100,000 people for the previous three reporting years. Ninety-five percent (95%) of Lyme disease cases come from 14 states. They are concentrated heavily in the Northeastern, Mid-Atlantic,and upper Midwestern states. Verified cases reported from other US states are usually associated with travel to states with high rates of infection. Lyme disease is caused by the bacterium Borrelia burgdorferi, and it is transmitted to humans through the bite of infected blacklegged ticks.

Lyme disease testing and interpretation is complicated. CDC currently recommends a two-step process when testing blood for evidence of antibodies against the Lyme disease bacteria. Both steps can be done using the same blood sample. The two steps of Lyme disease testing are designed to be done together. CDC does not recommend skipping the first test and just doing the Western blot. Doing so will increase the frequency of false positive results and may lead to misdiagnosis and improper treatment. Some laboratories offer Lyme disease testing using assays whose accuracy and clinical usefulness have not been adequately established. New tests may be developed as alternatives to one or both steps of the two-step process, but before CDC will recommend new tests, their performance must be demonstrated to be equal to or better than the results of the existing procedure, and they must be FDA approved.

Northern vs. Southern I. scapularis

For more information, click here to view our Grand Rounds presentation "Does Arkansas Have Lyme Disease?" 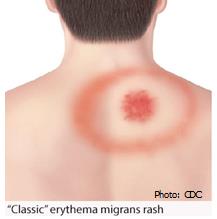 If left untreated, infection can spread to joints, the heart, and the nervous system.
Most cases of Lyme disease can be treated successfully with antibiotics. The ticks that transmit Lyme disease can transmit other tickborne diseases as well.

Because Arkansas is categorized as a low-incidence state, healthcare professionals should consider other diagnosis first, like: viral infections, STARI, fibromyalgia, or arthritis.

A rash similar to the rash of Lyme disease has been described in humans following bites of the lone star tick, Amblyomma americanum. The rash may be accompanied by fatigue, fever, headache, muscle and joint pains. This condition has been named southern tick-associated rash illness (STARI). The cause of STARI is not known.

Heartland virus is believed to be spread to people by infected ticks. Cases of Heartland virus have been identified in the Midwestern and southern United States, including Arkansas. Scientific investigations are underway to find out if a bite from an infected tick is how people get Heartland virus illness. Recent studies have shown that the Lone Star tick (Amblyomma americanum) can transmit the virus.

In general, people identified with Heartland virus infection have suffered a flu-like illness in the months of May to September. They all had a fever, experienced fatigue, and loss of appetite. Some also complained of headaches, muscle and joint aches, diarrhea, or feeling sick to their stomach. There are no vaccines to prevent or medications to treat Heartland virus infections.The majority of Heartland virus patients required hospitalization but were able to return to their normal health in the weeks and months following their discharge.

Bourbon virus was recently discovered in Bourbon County, Kansas. Only a few cases have been identified so scientists are still learning about possible symptoms caused by this new virus, and how people become infected with it. However, based on what we know about similar viruses, it is likely that Bourbon virus is spread thorugh tick or other insect bites.

People diagnosed with Bourbon virus had symptoms including fever, fatigue, rash, headache, other body aches, nausea, and vomiting. They also had low blood counts for cells that fight infection and help prevent bleeding. There are no vaccines to prevent or medications to treat Bourbon virus infections.