West Nile Virus (WNV) is a potentially serious mosquito-borne disease. More than 30,000 people in the U.S. have been infected with WNV since 1999. Occasionally, an infected person may develop more severe diseases such as "West Nile encephalitis," "West 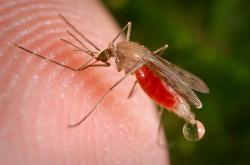 Other mosquito-borne diseases in Arkansas and surrounding states include St. Louis encephalitis and Eastern Equine encephalitis. Mosquitoes become infected when they feed on infected birds. These illnessesaffect birds, animals and humans, causing flu-like symptoms in people who are bitten by infected mosquitoes. Only certain types of mosquitoes carry WNV. A mosquito must first become infected by feeding on a bird (host) that has the virus and then bite a human or animal to pass the disease along. Certain species of birds (especially crows and blue jays) can also get sick and die from the disease, as can horses, although like most people, like birds and horses, show no symptoms.

Experts from the Centers for Disease Control and Prevention (CDC) believe WNV is established as a seasonal epidemic in North America that flares up in the summer and continues into the fall.

People infected by WNV will typically develop symptoms within 3 to 14 days after they are bitten by an infected mosquito. Many people are bitten by mosquitoes that carry WNV, but most do not know they've been exposed.

Risk through medical procedures is very low. All donated blood is checked for WNV before being used.