Newborn screening tests take place before your newborn leaves the hospital. Babies are tested to identify serious or life-threatening 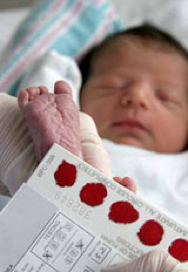 conditions before symptoms begin. Such diseases are usually rare. However, they can affect a baby's normal physical and mental development.

Most tests use a few drops of blood from pricking the baby's heel.

If a screening test suggests a problem, your baby's doctor will follow up with further testing. If those tests confirm a problem, the doctor may refer you to a specialist for treatment. Following your doctor's treatment plan can save your baby from lifelong health and developmental problems.

Newborn Screening is a public health service provided by all states to identify conditions that are not noticeable at the time of birth but may cause a serious disability or even death if not treated immediately.

In 2019, 99% of babies born in Arkansas received a newborn screen; 104 confirmed cases were identified and referred for treatment

In the absence of federal mandates to screen for any particular disorders, Arkansas historically added conditions for newborn screening one by one, always as a result of legislative action. A similar process was also employed in virtually every other state during the early decades of screening. The first disorder for which newborn screening was mandated in Arkansas was Phenylketonuria (PKU), per Act 192 of 1981. The next disorder, Congenital Hypothyroidism (CH), was added as a result of Act 481 of 1981. Screening for Sickle Hemoglobin Diseases was authorized in 1987 (Act 573), but the screening was not implemented until 1988. Later on, Act 113 of 1995 mandated screening for Galactosemia, which was implemented on January 1, 1996. Finally, the law mandating hearing screening for most Arkansas newborns was passed in 1999. To assure screening for all of these conditions, the Arkansas Department of Health (ADH) was designated the lead agency.