Bed bugs have been common in U.S. history. Although bed bug populations dropped dramatically during the mid-20th century, the United States is one of many countries now experiencing resurgence in the population of bed bugs. Though the exact cause is not 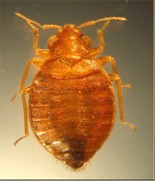 known, experts suspect the resurgence is associated with increased resistance of bed bugs to available pesticides, greater international and domestic travel, lack of knowledge regarding control of bed bugs due to their prolonged absence, and the continuing decline or elimination of effective vector/pest control programs at state and local public health agencies.

Although not known to transmit any human disease, they leave a trail of potentially itchy or painful bite reactions, and costly extermination bills in their wake. Most people are not aware they have been bitten because they inject an anesthetic and an anticoagulant that prevents a person from feeling the bite. The bites look like little red bumps; sometimes resembling mosquito bites, but people who are more sensitive to the bite can have localized allergic reactions. Scratching the bitten areas may lead to infection.

Bed bugs are small, flat insects that feed on the blood of sleeping people and animals. They are reddish-brown in color, wingless, and range from 1 to 7 millimeters in length. They can live several months without a blood meal.

Infestations of these insects usually occur around or near the areas where people sleep or spend a significant period of time. These areas include apartments, shelters, rooming houses, hotels, nursing homes, hospitals, cruise ships, buses, trains, and dorm rooms.

Bed bugs are experts at hiding. They hide during the day in places such as seams of mattresses, box springs, bed frames, headboards, dresser tables, cracks or crevices, behind wallpaper, and under any clutter or objects around a bed. Their small flat bodies allow them to fit into the smallest of spaces and they can remain in place for long periods of time, even without a blood meal. Bed bugs can travel over 100 feet in one night, but they tend to live within 8 feet of where people sleep.

Bed bugs are usually transported from place to place as people travel. Bed bugs travel in the seams and folds of luggage, overnight bags, folded clothes, bedding, furniture, and anywhere else where they can hide. Most people do not realize they can transport stow-away bed bugs as they travel potentially infesting new areas, including their homes, as they relocate.

One of the easiest ways to identify a bed bug infestation is by bite marks that appear on the face, neck, arms, hands, and any other body parts. However, these bite marks may take as long as 14 days to develop in some people so it is important to look for other clues when determining if bed bugs have infested an area. These signs may include the exoskeletons of bed bugs after molting, bed bugs in the fold of mattresses and sheets, a sweet musty odor, and rusty-colored blood spots from their blood-filled fecal material that is often excreted on the mattress or nearby furniture.

Everyone is at risk for bed bugs bites when visiting an infested area. However, anyone who travels frequently and shares living and sleeping quarters where other people have previously slept has an increased risk for being bitten and for spreading a bed bug infestation.

An integrated approach to bed bug control involving federal, state and local public health professionals, together with pest management professionals, housing authorities and private citizens, will promote the development and understanding of the best methods for managing and controlling bed bugs and preventing future infestations.

Research, training and public education are critical to an effective strategy for reducing public health issues associated with the resurgence of bed bug populations.

For questions about pesticide use and treatment of occupied areas for bed bugs, contact the U of A Cooperative Extension Office in your county.